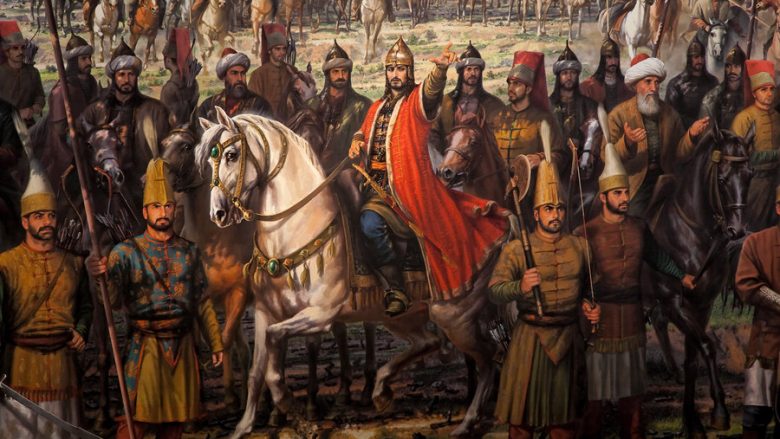 The beginning of the Ottoman occupation in Kosovo
Attacks by the Ottoman military to strengthen the Albanian lands began in the mid 80's. XIV. Led by the Rumelian Beylerbe, Timurtash Pasha, in 1385 the Ottoman armies entered Albania and invaded the cities of Stip, Prilep, Monastery and Kastoria. In Western and Ottoman documents of the century. XIV-XV for the cities of Skopje, Bitola, Kastoria, Ioannina, etc., as well as for Fushe-Dardania It is stated that they may be "in Albania" or "in Albanian lands". In 1386 the Ottomans invaded Nis.

The conversion to Islam of the Albanians severed many of them from the influence of the Slavic and Greek Orthodox churches (which held the liturgy in both Slavic and Greek), thus interrupting the momentum of the centuries-long process of Slavization and Greekization of Albanians. Islamization also enabled the Albanians to integrate into the life of the Ottoman Empire and to maintain, to some extent, their economic and political positions.

After Skanderbeg's death in 1468, the Albanian state continued its resistance. But in 1479, all Albanian lands fell under Ottoman rule.

Kosovo under Ottoman Empire XV - XVIII century
The expansion of the Ottoman Empire makes it possible to change its state organization. To look at this more solid basis for the administration of law, during the reign of Sultan Suleyman II (1520-1566), a new service organization was conducted and the laws created by other ordinances generally revised and appreciated today, with the aim of the centralization of power in the hands of the sultan was achieved in the first place.

At the conclusion of this reorganization, the territory of the whole empire was divided into 32 districts, which may be smaller for the administration. At the top of every line is a beaver. The provinces of the Balkan Peninsula were implemented in three islands: the Bosnian one in the north of the peninsula, the Rumelian one in the center and the Sea one in the islands of the Aegean Sea and one in the southern coast. Each eel was divided into a number of sandwiches. The Albanian territories have become part of Rumelia's eagle. They were divided into several sandwiches. The number, extent and designation of the tires has changed from time to time here. Sando Sandzak is an Administrative and Military unity that exercises timers, wheels and reconfigurable military tire forces. Sandwiches were divided into smaller units, to show they were called kazas, the service of this service was divided into nahiyes. In general, the sandzak is a vice of the sandzakbei (myteselim) and the commander of the spahin (alay-bej), an experience in every phase a quality (kadi) directly dependent on the sultan. The opportunity for even more functionaries to pay less attention if they could smell it. The vast majority of officials, as well as most feudal lords, were of Albanian origin.